Why did I decide to get a dog? 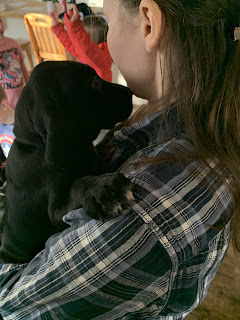 Sometime in January I heard or read something about service dogs for anxiety, they help you through panic attacks, or even help to prevent them by alerting you because of things you are doing or your rising heart rate. I thought, “wow, that’s cool! I knew there were seeing, hearing, and diabetic and seizure alert service dogs, but I didn’t know they could help with a mental disability like panic attacks.” I looked up the cost to get one out of curiosity and saw they were $15k-$30k for a dog so I quickly dropped that idea.

Then a couple weeks later we were picking up a loveseat from an old lady with the nicest little pup, looked like a shih tzu mix and was so sweet. I had a shih tzu when I was a kid so obviously it made me want one and since this is the first time we haven’t been renting I finally felt like we could get a dog without the burden of trying to find a rental that would allow dogs. At first I thought a little companion dog would be good for us, but then I thought maybe something a little bit bigger would be good so they kids could take the dog on walks around the neighborhood and have at least a little bit of protection, even if it’s just a sense of security. I started researching what dogs would best suit our needs and decided that a cocker spaniel, golden retriever, or German shepherd would be best, but the internet repeatedly told me that German shepherds are best for second time dog owners, not first, so eventually I put them off the list, though, maybe they’ll be on a future list.

Our budget was tight so I knew I couldn’t afford a purebred from a reputable breeder, so I thought a mutt from an accidental litter would be best. Two healthy parents, lower chances of genetic disorders being inherited, and I wouldn’t be supporting a “backyard” breeder. And if you’re reading this and thinking that I should adopt, not shop, then I’d like you to know that I would gladly adopt but at this time it is not good for our family. My kids have (had?) a great fear of dogs, and we need to be able to start with a puppy, so they have watch her grow up and get used to her and learn how to be around dogs gradually. And while I am confident that, with all of the resources available, I can train a blank slate of a puppy, I am not confident that I will know how to fix any issues an older rescue might have. I know that shelters have puppies too, but they (at least our local one) spays all dogs and cats, even puppies, and that’s not recommended for large breed dogs, at least not until they are close to 2 years old.

Anyway, while I was waiting to find a good puppy we watched a lot of YouTube videos on dog training, and temperament testing. While watching a video on how to pick out a good puppy I found out that you can actually owner train a service dog! That means that the $15k-$30k goes down to just the cost of the pup (and obviously upkeep)! I found some videos on YouTube showing how to train your dog to help with anxiety. These dogs are called Psychiatric Service Dogs (PSD) and they can help with PTSD, anxiety, panic attacks, and other things. They’ll alert you to a flare up and/or help you deal with/calm down from an “episode”.  PSDs are NOT the same as Emotional Support Animals (ESA). ESAs are great, but they are not trained to do a task to help you with a medical condition. PSDs ARE trained to perform certain tasks to help with a medical condition and will be trained specifically for Public Access (PA) so that they are well behaved out in public when they are working.

I had “interviewed” several litters before ultimately settling on Isabella. She did well on the temperament tests that I did on her and was the only one in her litter that kept coming back to me and tried to fetch a piece paper for me. She wasn’t the calmest puppy, but was still on the calmer side compared to her siblings. Her dad, golden retriever, was a calm one and they said that one of his earlier litters (a pure golden retriever litter) had a pup that went on to be a service dog. Her mom is a German shorthair pointer who is not full of a crazy amount of energy like the average GSP. Both breeds are known for being good tempered, easy to train, non reactive, and not aggressive at all. The only real drawback to having a GSP as a service dog is their massive amount of energy and need for exercise, but since I picked a pup on the calmer side (and she’s half golden retriever) I think she has great potential for service work.

I’m still not totally sure I want to be taking her out in public, especially given the horror stories I’ve heard of fake spotters and people just not being knowledgeable of ADA laws. I’m still going to train, socialize, and desensitize her as if she will do PA in the future, but even if all she does is help me at home it’ll be a huge help! 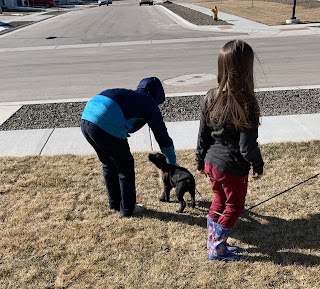