Life With a Puppy: Week One 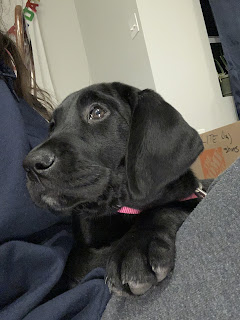 We picked her up after church Sunday afternoon, she was a little anxious on our way home, Thank the Lord it was just a 25 minute drive. When we got home she was able to meet the rest of the family and explore the house a bit. I had gotten a small bag of food, a toy, halter, a leash, and retractable leash the day before so we at least had the basics covered. When I was a kid I had a shih tzu puppy that we had in a topless cardboard box to sleep in at night, so, since we recently moved and still have a ton of boxes of varying sizes I figured I could do the same with this pup, but nope. I ended up going to PetSmart the next day and getting a comfy bed and a crate. She is ok with the crate, but really doesn’t like it when the door is closed so I need to spend more time trying to get her used to being in a closed crate, but until then she has an enclosed area that I set up with her crate, a wall, and a box or tub and my bed to sleep in. She seems to be doing really well with it. I *think* I’m going to keep trying to get her comfortable with the closed door (she sleeps in it and goes in by herself as is), but I’m not sure at this point. I’m home all day everyday except for a couple hours on Sunday mornings so it’s not like she’s going to be in the crate a lot. I hope to train her to be my service dog (anxiety and panic attacks), which would mean that eventually she may not need to be left alone at all. But that is for the distant future (a year from now at the earliest), and I’ll need to do what we need for now and then and train for both. 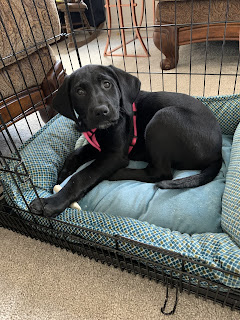 Potty training was going super well for the first 4 days or so before she had an accident and she’s had one a day since then, which is what I get for getting a bit prideful about it those first few days, haha! I made a bell to hang on the door today to help us prevent accidents in the future. The idea is that she’ll ring the bell  (that’s hanging from the door) when she needs to go potty, we’ll hear the bell and take her out.

She’s gone on 3 car rides so far. I mentioned earlier that on the first one she was a little anxious, well, on the second one she was a bit more anxious, but eventually fell asleep, which I took as a good sign that she was getting used car rides. But that was not so because on the third ride she was having an even harder time and on the way back she threw up. So, now I need to spend some extra time s l o w l y getting her used to the car. My plan is to go sit in the van with her for a couple minutes, then come inside. Then, just pull out of the garage and sit in the driveway. Then take short drives around our neighborhood, before going on a longer ride across town. I was anticipating it taking several weeks, but a more experienced dog person said that they had to do the same thing with their dog and it only took a couple weeks, so I’m hoping that it’ll at least not take more than a month.

There are several things we’ve been working on this first week, the one with the biggest benefit is leave it, followed by look at me (guardami), sit (seduto), lay down (a terra), stand, and down. Some of the commands are in Italian because I’m still (always?) learning Italian and want to have that connection, and I know (from talking to other people) that dogs can easily be bilingual and even trilingual without any problems or confusion on the dogs part. The plan is that she’ll learn the commands little by little and we’ll continue to reinforce what she’s learning everyday (and in different environments) for the next year to really solidify these lessons, but really training is a lifetime commitment especially when you want a really well trained dog. The kids are all eager to teach her things as well, so I’ve told them that I’ll be the one to teach basic obedience and manners and they can teach her the fun tricks, like shake, sit pretty, and roll over. We also have plans do to some agility training with hoola hoops so we’ll have a means to exercise her inside on those days when long walks outside aren’t going to happen (super smoky outside, or subzero temps); I think a little obstacle course through the house would be fun.

She is 10 weeks right now, and 18 lbs, she seems to be gaining about 2 lbs a week, and I figure that she’ll be about 50 lbs fully grown based on the size of her parents.

End of first week thoughts: puppies are a lot of work and I couldn’t do this without all of my eager helpers. <3 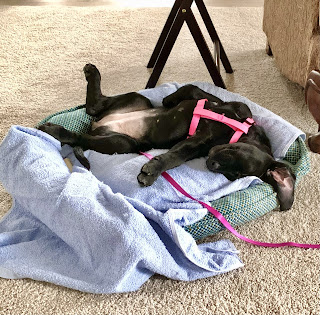 Posted by Carina Rose at 2:08 PM No comments: