Life With a Puppy: Week Two

This week we are starting work on two areas of desensitization, aka overcoming fears: baths/the bathtub, and the van. The first day I had to get in the tub with her and squeeze out a spot of peanut butter for her to lick, only staying in the tub for a few minutes. By the third day of doing the same thing she willingly walked into the bathroom by herself and thought about hopping in the tub with me. On day three I added a little trickle of water from the faucet while she was licking the peanut butter, she didn’t like that too much, but didn’t freak out either. We took a day off of bath training, so on day four I let the water trickle for a few minutes, she was ok with it, but still wasn’t a fan. I did let the tub fill up a bit but it didn’t cover the whole bottom so she didn’t have to touch it if she didn’t want to.

As I mentioned last time, she doesn’t like car rides at all so day one of “van training” was just sitting in the van for a few minutes while she licked peanut butter and sniffed around. On day two we sat in the middle section of the van and I let her sniff around a bit more. 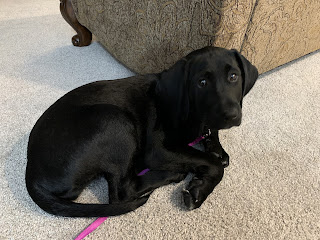 I’m not sure how many things I can try desensitizing her to at the same time, so I’m trying to take it easy and not do too much, and I’m not working on more than the two things in the same day. Maybe I could go faster and try the tub 2-3 times a day, but I’m just not sure at this point. I also want to start working with her on being in the crate with the door closed, so I’ll be adding that in little by little too.

By the beginning of this week she had conquered her fear of the stairs, now she just needs to learn how to gracefully scale them.

In other family news, all four kids got sick this past week and she was sad that her play buddies weren’t feeling well enough to play with her, the whole energy of the house was a bit lower than normal. Isabella was definitely happy when they started feeling better. 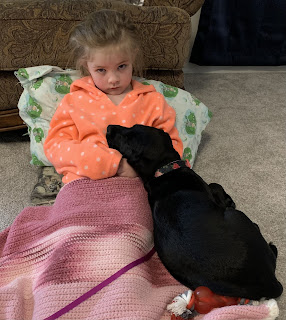